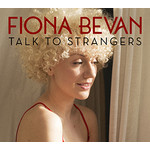 Talk To Strangers is the bewitching debut album from Suffolk-born singer-songwriter Fiona Bevan, released on the 28th April on Navigator Records. Bevan describes her debut album as "pop in disguise", and the dozen, dynamic songs have hooks, harmonies and melodies that linger from first listen, but are defiantly timeless and purposely hard to pin down. Bevan, who has already tasted success as a chart-topping songwriter for One Direction, wrote all 12 songs on Talk To Strangers, which was recorded in producer Shawn Lee's Bloomsbury studio on entirely analogue equipment.

Bevan plays guitar, violin, double bass, accordion, and harp, and even adds the occasional whistle of birdsong. Holding everything together is her extraordinary, sweet voice, as unique and distinctive as her mop of peroxide curls. The album was mastered in San Francisco by the legendary George Horn, who has been cutting vinyl since the '60s for musicians including Paul Simon, Sly & The Family Stone, Bob Dylan, and John Coltrane.