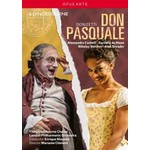 One of the reasons why Donizetti's Don Pasquale is regarded as a cornerstone of the Italian comic opera tradition is because its characters are no mere commedia dell'arte stereotypes, but complex, vulnerable human beings. This is brought to the fore in Mariame Clément's sensitive and perceptive production, which was hailed by the Financial Times as a 'Glyndebourne classic'.

Acclaimed buffo baritone Alessandro Corbelli sings the title role 'with just the right degree of lugubriousness', while Danielle de Niese, one of today's most sought-after sopranos, is an 'engaging' and 'irresistible' Norina (The Telegraph).

Extra features: Behind the Curtain, Danielle de Niese introduction, Staging the Opera and a cast gallery.

"There is plenty to enjoy in this production, with lots of original visual gags that delight the audience and work well in their context without at any time going too far. The performance is really something to cherish. The singers are all well able to cope with Donizetti's often rowdy orchestration, ringing out loud and clear and managing their florid divisions without aspiration and plenty of fizz. With the exception of Alessandro Corbelli in the title role, they are all young and full of bounce as well as dramatic involvement. Alek Shrader as Ernesto is a real find: much more than the usual Rossinian tenorino, he displays a fine lyric voice with plenty of power ... and a good pair of legs as well." (MusicWeb Sept 2014)

"a straightforward production that eschews visual gags and focuses on the characters...Any recording with Alessandro Corbelli in the title-role has to be worth investigating and his playing of the old curmudgeon...is Italian comic opera at its most sophisticated...de Niese creates a brilliant characterisation...Mazzola gets playing of vitality out of the LPO." (Gramophone)