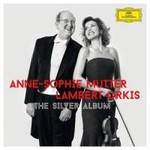 This special 2 CD collection celebrates 25 years of Anne-Sophie Mutter and Lambert Orkis performing and recording together. The celebrated violinist says: "Meeting Lambert was a stroke of luck for me. It quickly became clear how perfectly we breathe and phrase together. With Lambert I can do anything." Ever since, the two of them have explored the musical worlds of many different composers in a wonderful artistic partnership.

With 40 minutes of new music, which she will be featuring on her tour concerts, and some of her most famous encores this album is a must-have for all Anne-Sophie Mutter fans.

"Never before have Mutter and Orkis seemed so joined at the hip, giving and taking, conducting dialogue, chasing each others' thoughts...She plays with a new degree of maturity and depth, especially visible in the slow movements...Magical music-making, this." The Times, 19th March 2010 ***** (on the Brahms)

"it is possible to say that Orkis finishes Mutter's sentences and that they play as a single voice...it is undeniable that this is a disc of strong identity and integrity." (Gramophone)