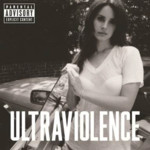 Lana Del Rey's sophomore album Ultraviolence was recorded in Nashville and produced by Dan Auerbach from The Black Keys.

Commenting on West Coast and Ultraviolence Lana explains "The record is...beautiful - it's so wrong and exquisite. It is absolutely gorgeous - darker than the first."

Lana captivated the world with her debut album Born to Die, which reached Double Platinum in New Zealand and sold over 5 million copies worldwide, followed up by her release Young And Beautiful, taken from the soundtrack of the hit movie The Great Gatsby, her massive worldwide hit Summertime Sadness and her haunting version of Once Upon a Dream taken from the film Maleficent.