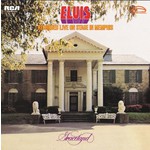 Following the artistic success of his 1973 Stax sessions [MOVLP872] and the global phenomenon of the Aloha From Hawaii Via Satellite [MOVLP739] album and broadcast the same year, Elvis opened 1974 with a 15 city tour routed to end in Memphis and a state-of-the-art concert recording. When originally released as a single LP, Elvis Recorded Live On Stage In Memphis reached #1 on the Country charts and featured "How Great Thou Art," the track that would bring Elvis his third Grammy win.

This luxury quadruple vinyl reissue contains a previously unreleased "Test Run" of the entire show recorded with a live audience at the Richmond Coliseum a few days before the legendary concert. The remarkable "test run" performance was recorded in MONO, drenched in the reverb Elvis preferred, and provides new insight into the magic of Elvis.

As a special added bonus for Elvis aficionados, we've included five intimate tracks (three of them previously unreleased) cut at the RCA Studios in Hollywood on August 16, 1974. Originally intended as reference recordings for an upcoming Las Vegas engagement, the performances-which include "Down In The Alley," "Good Time Charlie's Got The Blues," "Softly As I Leave You," "The First Time Ever I Saw Your Face" and "The Twelfth Of Never" - provide a rare fly-on-the-wall glimpse into Elvis' consummate backstage artistry as he prepares these songs for concert.

Side C
1. How Great Thou Art
2. Suspicious Minds
3. Introductions
4. Blueberry Hill / I Can't Stop Loving You
5. Help Me

Side G
1. Suspicious Minds
2. Introductions
3. I Can't Stop Loving You
4. Help Me
5. An American Trilogy
6. Let Me Be There
7. Funny How Times Slips Away