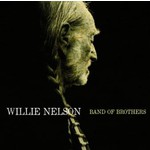 The new Willie Nelson studio album premiering 14 performances including nine brand-new songs composed by America's quintessential pop/country songwriter. The much-anticipated successor TO ALL THE GIRLS ..., BAND OF BROTHERS is the artist's first album of predominately new originally material in nearly two decades, debuting the master tunesmith's first major batch of newly-penned songs since his SPIRIT album in 1996. "I got on kind of a writing kick," Willie Nelson said recently, "it's good to be writing again." With a six-decade career and a catalogue of more than 200 albums to his credit, the iconic Texas singer-songwriter has earned a permanent position in pop music's pantheon with songs combing the sophistication of Tin Pan Alley with the rough-and-tumble grit and emotional honesty of country music.