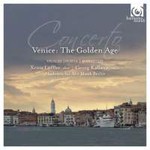 This disc is an invitation to explore one of the great attractions of Venice in the Baroque era, the famous 'ospedali'. These were establishments that took care of and educated children and adolescents. In the early 18 century almost all the leading Venetian musicians were linked with the musical activities of one of the ospedali. The best-known among them was Antonio Vivaldi: just 25 when he was hired as violin teacher at the Ospedale della Pietà. Among the residents of the Pietà was a girl named Pellegrina, for whom Vivaldi wrote many of his oboe concertos. Accompanied by her colleagues of the Akademie für Alte Musik Berlin, oboist Xenia Löffler not only breathes new life into a selection of concertos by the 'Red Priest', but also several by his emulators, among them a contemporary composer, Uri Rom.

The programme begins with a concerto composed by Rom [b. 1969] in 2013 to a commission from the Akademie für Alte Musik and dedicated to Xenia Löffler, one of today's leading oboists. 'Concerto L'Olimpiade' is a sort of pasticcio based on works by Antonio Vivaldi and Carlo Tessarini. The first movement is based on the aria 'Siam navi all'onde algenti' from the opera' L'Olimpiade'. The second movement reflects the reception of the Italian style by J. S. Bach. The finale takes as its models a movement from a violin concerto by Vivaldi (RV 172) and a movement from a violin concerto by Tessarini. The solo part and the formal layout of the movement are new.

Since 2001 Xenia Löffler has been a member and principal oboist of the Akademie für Alte Musik, appearing regularly on international concert platforms as a soloist with that orchestra and with Collegium 1704 (Prague), the Batzdorfer Hofkapelle and the orchestra of the Halle Handel Festival.

"Here, in all its radiant apparel, is the splendour of Venice's golden age...Loffler is a fine performer with a rounded, mellow tone and remarkable dexterity...a captivating musical portrait of La Serenissima, whose distinctive colours and rhythmic energy suffuse this disc." BBC Music Award Nomination 2015 - Concerto

"It is always a pleasure to hear the Akademie fur Alte Musik Berlin, whatever they play...the third 'theme' of the disc is undoubtedly the superb oboe-playing of Xenia Loffler, as smooth and swellingly expressive in slow movements as it is ripplingly agile in quicker ones. It is masterly playing and this disc is her triumph." (Gramophone Magazine Award Nomination 2015 - Baroque Instrumental)

"the star turn here is Loffler, whose evenly spoken playing, communicative articulation and dextrous technique make her one of the most accomplished Baroque players around at present." (International Record Review)

"The playing on this album is superb as one would expect from this ensemble, steeped as it is in baroque performance practice. Indeed the disc is nominated for a BBC Music Magazine Award in the concerto category. The 22-person orchestra presents a concert series in several Berlin venues each year, but this material was recorded in a studio there, and the quality of recording is also superb. The oboe soloist is wonderful - virtuosic without excessive ornamentation." (AudAud.com)

The Renaissance of Italian Music: The National Gallery Collection