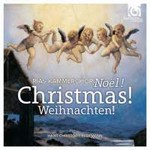 The great painters have always known how to combine the different perspectives of the Nativity into a single picture. Here the RIAS Kammerchor tells the Christmas Story in music: Mendelssohn frames the painting, to which the darkness and the promise of promise of heavenly light form the background. The Virgin Mary leads us to the heart of Christmas Night and to rejoicing at the Saviour's birth. We come full circle with the Four Motets of Poulenc, which sum up all the facets of Christmas and its emotions.

Founded in 1948 under the auspices of 'Radio in the American Sector', the RIAS Kammerchor played an important role in the revival of post-war musical life in Berlin. The core of its repertoire is the music of the Baroque era, together with the modern classics and the music of today. It swiftly acquired an international reputation for premiering new works by such composers as Penderecki, Reimann, Kagel, Gundermann and Tan Dun.

"There is no musical genre more blissfully bound by tradition than that of Christmas music. The reasons for this are many and debatable, but suffice it to say that this "tradition", built around a once-a-year wintertime celebration of very particular events, hasn't added much in the way of serious or significant new repertoire since the first half of the 20th century, the last true "hit"-one that's claimed a solid place in the standard repertoire-being John Rutter's What sweeter music, written in 1988 for the famous service of Nine Lessons and Carols at King's College, Cambridge (which, with its annual commissions is one of the few remaining sources of new, quality Christmas choral music). But when this traditional body of repertoire consists of music of such character and quality, from the hundreds of carols to original choral masterpieces, from early chant and Renaissance motets to Bach, Handel, Berlioz, Britten, Poulenc, and, yes, Rutter-not to mention the hugely popular collections of carol arrangements by David Willcocks and others-who can complain? The only problem for today's choirs, especially those planning a recording of Christmas music, is how to come up with a program that isn't just like hundreds of others, rehashing the same familiar list of "old" favorites, beginning with "O come, o come Emmanuel" and ending with "Hark! The herald angels sing". Hans-Christoph Rademann and his RIAS Kammerchor have successfully avoided that kind of redundancy by organizing their program around a thoughtfully conceived theme-not overtly centered around angels and shepherds, mangers and Magi, but encompassing the symbolism that underpins the Christmas story, particularly regarding darkness and light, arrival and departure, hope, joy, and transformation. And to do that, they selected an array of works, early to modern, that together bring these aspects of the story to life while engaging listeners in the pleasure of world-class choral performances. Among the 20 a cappella pieces-all with either German or Latin texts-there are a few "old" favorites, but even these are not too often heard, among them Bruckner's Ave Maria and Virga Jesse, and Sweelinck's Hodie Christus natus est. Yes, Praetorius' Es ist ein Ros entsprungen is here (but who can ever tire of this quiet, simple little gem), and instead of the well-loved but truly overused Pearsall arrangement of In dulci jubilo, we are treated to a magnificent and rarely-heard 8-part, double-choir Praetorius version-a fact strangely not mentioned in the notes. Several selections by 16th-century composer Johann Eccard are well worth hearing, and you can't help but be moved by Arvo Pärt's Magnificat, among the most powerful settings of this text ever written. No doubt Poulenc's Quatre motets pour le temps de Noël sound as fresh and modern today as they must have 60 years ago-no composer has more perfectly captured the spirit of these texts, especially, as often as they have been set over the centuries, the O magnum mysterium and Hodie Christus natus est. Grieg's Ave maris stella is another highlight, from a composer we don't usually associate with sacred choral-let alone Christmas-music. Choral aficionados will not have to be reminded of the RIAS Kammerchor's exemplary credentials, and if you aren't aware of this choir's command of ensemble technique and expressive style, you only have to listen to the first few bars of the first track, Mendelssohn's Frohlocket, ihr Völker auf Erden, to know you're in the company of one of the world's first-class choral ensembles. But perhaps the finest single demonstration of this group's virtuosity is heard in the delicate and subtle nuances of phrasing and dynamic shading, of balance and dead-on intonation in Max Bruch's motet In der Christnacht-another rarely-heard highlight, as is the setting of the hymn Die Nacht ist vorgedrungen (The night is far advanced) by Uwe Gronostay, a former conductor of the choir. The sound, from the Jesus-Christus Kirche in Berlin, is an ideal match of choir and venue. If you're looking for a Christmas program that honors the traditional yet is far from ordinary, don't miss this. Highly recommended." (10/10 ClassicsToday Oct 2013)

"The music is extraordinarily wide-ranging and has been exceptionally well chosen and sequenced… the result is an unmitigated joy- the performances are immaculate and most expressive, particularly of Poulenc's four motets 'pour le temps de Noel… a performance that could not, in my opinion be improved upon. This is an truly outstanding disc" International record Review

"The singing, all unaccompanied, has a natural, unforced eloquence, and is of a standard which makes criticism an impertinence. An outstandingly accompanied issue." Five Stars BBC Music