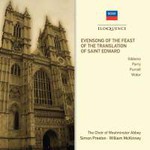 Westminster Abbey is a royal church, founded in 1065 by King Edward the Confessor, who was buried in the original Norman building only a few days after its consecration. Almost exactly two centuries later, in 1269, his body was 'translated' or removed to its present resting-place in the shrine east of the High Altar. It is this ceremony which is commemorated every year on the anniversary, 13 October. The Translation of St. Edward is, in fact, one of the high festivals in the Abbey domestic calendar.

Evensong is the service sung in nearly every Anglican church on Sundays and in cathedrals and collegiate churches several times a week. It is modeled on the pre-Reformation 'lesser hours', and in fact a skilful conflation of two of them, Vespers and Compline, made by Archbishop Cranmer for the First English Prayer Book of 1549. The service as here recorded is sung in cathedral as distinct from the parish church style. This in effect means the two Canticles, Magnificat and Nunc Dimittis, are treated as extended choral pieces, while the Versicles and Responses have music more elaborate than is usually heard in parish churches. The music on this recording is by Gibbons, Byrnd, Parry and Purcell, and concludes with Simon Preston's celebrated recording of the Toccata from Widor's Symphony No. 5, a regular inclusion at British royal weddings.

Released in its entirety for the first time on CD, this Argo recording was released to coincide with the Royal Wedding at Westminster Abbey.

anon.:
How lovely are Thy Dwellings
chant by J. Coward

Parry:
I was glad

Purcell:
Christ is made the sure foundation (Westminster Abbey)