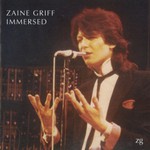 Immersed is a collection of songs recorded between 1976 and 1983. The tracks were always intended to be demos, but on finding them recently by chance on old reel-to-reels, Zaine was surprised as he had thought them lost. All of the songs have been restored and remastered by Steve McGough at Stebbing. The 12 tracks on Immersed have never before been released, and were recorded in several different studios with different producers and contributors including Warren Cann, Clive Edwards, Chris Slade, Manfred Mann Chris Thompson, Stevie Lange, Steve Bolton, Matt Irving, Andy Clark, Laurie Latham, members of the LPO, Reflex Band, Alan Coates, David Flett, Robert Norman, Adrian Shephard, David Wells, Simon Darlow and Hans Zimmer.