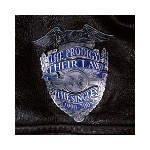 Even more so than the celebrated Chemical Brothers -- who began recording after Prodigy but received a hits compilation before -- Liam Howlett and co. were fantastic singles artists who also fashioned excellent full-lengths. As such, Their Law 1990-2005, the singles collection that could put the cap on their career, is a collection that will leave listeners breathless but also one that can't capture how special Prodigy were to the electronica and rave scenes. Their biggest single, "Firestarter," comes first, and its LP (The Fat of the Land) gets most of the early slots, although things right themselves by the end with no less than five singles -- all of them incredible -- from 1995's Music for the Jilted Generation and four from 1992's Experience. Although including three tracks from 2004's desultory Always Outnumbered, Never Outgunned may help fans hear, for the first time, the best of a bad album, it's nearly criminal that it comes at the expense of solid material from Music for the Jilted Generation and Experience (like "Break & Enter" and "Wind It Up"). (4.5 / 5 All Music Guide)