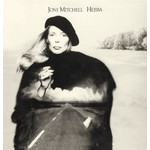 The title word HEJIRA is a transliteration of the Arabic word 'hijra' meaning journey which was a big inspiration for the album, as Mitchell said "the whole 'Hejira' album was really inspired... I wrote the album while traveling cross-country by myself and there is this restless feeling throughout it... The sweet loneliness of solitary travel."

Although the album was not as commercially successful as its predecessors it has been widely critically acclaimed and recognised as one of the high water marks of Mitchell's illustrious career, with special mention to the support of Jaco Pastorious's distinctive fretless bass.

The Hissing Of Summer Lawns (LP)