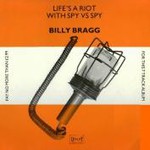 Billy Bragg, once-described as a "one-man Clash," has spent the last two decades writing and performing passionate, witty, socially conscious music. Yep Roc Records re-issued Life's a Riot With Spy Vs. Spy, 1983's mini-LP that first introduced the world to Billy's style -- roughly strummed electric guitar and stark vocals belying a keen sense of melody and committed, deeply humane lyrics on topics ranging from life and love to social upheaval and the plight of the working class. Recorded live to 2-track tape for free over the course of three afternoons in Chappell Music's tiny demo studio in the modest hope of selling the occasional copy at early gigs, Life's a Riot... had initial sales topping 50,000 (ultimately over 120,000) without the aid of advertising. It spent 12 weeks at #1 on the UK indie chart and reached #32 in the national LP chart and featured his first underground anthem -- "A New England.