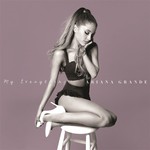 Ariana Grande
My Everything (Deluxe)

Following the chart-smashing single "Problem" is Ariana Grande's second album. A host of guests appear alongside Ariana: long-time friend and collaborator Big Sean lends a verse to the soulful "Best Mistake", while The Weeknd adds energy to the sexy "Love Me Harder". Childish Gambino contributes to "Break Your Heart Right Back", and "Hands On Me" sees her team with none other than A$AP Ferg. Then, there's "Why Try" which brings Ariana together with top hit-makers Ryan Tedder and Benny Blanco for another heartfelt gem. Among these collaborations, One Direction's Harry Styles wrote the powerful "A Little Bit Of Your Heart" specifically for Ariana.