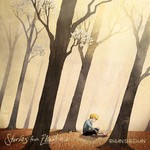 Sheehan is an award winning NZ-based composer and producer of cinematic music, known for his unique melding of experimental soundscapes with emotive orchestral arrangements and environmental sound recordings.

"Stories From Elsewhere shows again that Wellington's Rhian Sheehan is one of the country's best composers and musicians... [it's] a testament to his ambitions, his willingness to take risks and come up with music which, and there is no better way to describe it, is simply beautiful..."
- The Dominion Post - 4.5 stars

Rhian Sheehan is an award winning New Zealand-based composer and producer of cinematic music, known for his unique melding of experimental soundscapes with emotive orchestral arrangements and environmental sound recordings. 'Stories from Elsewhere' represents Sheehan's fourth full-length studio album and his most evocative album to date.

All three of his previous albums have been critical and commercial successes with his debut album 'Paradigm Shift' and sophomore album, 'Tiny Blue Biosphere' both regarded as landmarks in New Zealand electronica and acclaimed for their visionary blend of cerebral beats with sci-fi storylines. However, his latter releases - 'Standing in Silence' and follow up EP, 'Seven Tales of The North Wind' saw Sheehan move into a new and more cinematic direction - with the releases being lauded both in NZ and internationally; as well as being regarded by many as archetypal amongst the ambient post-rock genre.