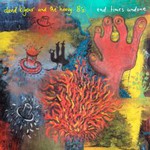 Every few years, David Kilgour releases another excellent album that serves to remind his fans why his work is a perfect place to turn for intelligently crafted, melodically rich, emotionally powerful indie rock that doesn't truck with clichés and always delivers the goods. The 2014 missive End Times Undone is his third release with the Heavy Eights, and they provide wonderfully textured guitar-bass-drums backing for Kilgour's voice. Meandering peacefully through pastoral daydreams like "Light Headed," jangling in classic New Zealand fashion on "Christopher Columbus," or putting some country in the indie on "Comin' On," they show a nice bit of restraint. On the flip side, they whip up murky psych pop concoctions ("Like Rain," "Down the Tubes"), noisy uptempo and midtempo indie gems ("Lose Myself in Sound" and "Some Things You Don't Get Back," respectively), and guitar-heavy rock ("Dropper") that prove they have some grit in the mix, too. The only fumble is on the blues-rock-infected "Crow," which just proves that Kilgour isn't perfect. Most of the time he gets pretty close, though. His songwriting, which is a truly collaborative effort here with all members being credited, is up to his usual levels, with plenty of poppy hooks and haunting feels. His voice, too, shows no signs of being anything less than the ideal vehicle to put over the songs. Despite having done basically the same album for a quarter century, there are no signs of wear and tear to be found anywhere in the process. Unless he suddenly discovers Balkan folk songs or falls in with a crew of rappers, no doubt he'll release another album of thoughtful and beautiful indie rock in a few years. Until that happens, End Times Undone is a fine addition to a long career of near-brilliant indie rock.