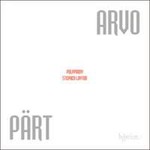 Stephen Layton and Polyphony have a long and fruitful relationship with the music of Arvo Pärt. Their recording of Triodion and other choral works (CDA67375) won a Gramophone Award and became a cult classic. The extraordinary purity of Polyphony's singing is the perfect vehicle for music of such clean, elemental simplicity, such cathartic calm.

This third Pärt album from Stephen Layton and Polyphony reaches right back, intriguingly, to the composer's youthful modernist phase and spans nearly five decades-from 1963 to 2012-in the process. As with the album Triodion, it reflects an increasingly broad spread of languages and sources in Pärt's chosen texts. Latin, German and English are joined here by Church Slavonic and Spanish. A range of biblical texts are set alongside ancient prayers.

"this one is something special. In part this is because of the choice of repertoire, which mixes the familiar and the less-often heard, and includes two first recordings, and in part it is because of the exquisite sound produced by Polyphony...Highly recommended." (Gramophone Editor's Choice Oct 2014)

"Layton and forces are simply fantastic here, boasting a purity of sound and sweetness of approach that make for the perfect Part pairing. The sound is exquisite, and this is one of the best Part albums I have ever been privileged to hear" (Five Stars AudAud.com)