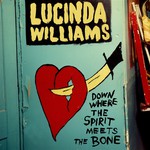 Lucinda Williams
Down Where The Spirit Meets The Bone

Lucinda Williams has been maneuvering down a path all her own for more than three decades now, emerging from Lake Charles, Louisiana (a town with a rich tradition in all of America's indigenous music, from country to the blues) having been imbued with a "culturally rich, economically poor" worldview.

This past decade has brought much in the way of musical and personal growth for Williams, evidenced on albums like West (2007), which All Music Guide called "flawless…destined to become a classic" and Blessed (2011), which the Los Angeles Times dubbed "a dynamic, human, album, one that's easy to fall in love with." Those albums retained much of Williams' trademark melancholy and southern Gothic starkness, but also exuded more rays of light and hope - hues that were no doubt imparted by a more soothing personal life, as well as a more settled creative space.

Those vibes come to the fore once again on Down Where The Spirit Meets The Bone. While she stays very much rooted in the here and now, Williams also conjures up the spirit of classic '70s country soul. The resulting warmth of tone gives the album a late-night front-porch vibe -- one that could be accompanied by either a tall glass of lemonade or something a little stronger, all the better to let the sounds envelope the listener like a blanket of dewy air.

Disc 2
1. Something Wicked This Way Comes
2. Big Mess
3. When I Look At The World
4. Walk On
5. Temporary Nature (Of Any Precious Thing)
6. Everything But The Truth
7. This Old Heartache
8. Stowaway In Your Heart
9. One More Day
10. Magnolia