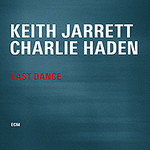 From 1967 to 1976 Charlie was Keith Jarrett's bass player, first in the trio with Paul Motian, then in the "American Quartet" completed by Dewey Redman, a period reflected on ECM on the albums "The Survivors' Suite" and "Eyes of the Heart" - as well as the "Arbour Zena" album with Jarrett's orchestral music and Jan Garbarek. When Paul Motian began to find his voice as a composer, Charlie offered encouragement, playing on "Conception Vessel" and "Tribute". The Motian-Haden association, established inside the Jarrett band, was extended in Charlie's large ensemble, the Liberation Music Orchestra (as on "The Ballad of the Fallen") and elsewhere. One of Motian's last recordings, "Live At Birdland", reunited him with Charlie in a group with Lee Konitz and Brad Mehldau, improvising freely on jazz standards.

In 2007 Charlie Haden and Keith Jarrett were reunited in the studio for the first time in more than 30 years. The results of these informal recording sessions at Jarrett's home studio were the Grammy nominated Jasmine (released in 2010), and Last Dance albums.

With Last Dance Keith Jarrett and Charlie Haden broaden the scope of their duo project to showcase jazz classics like Thelonious Monk's "Round Midnight" and Bud Powell's spritely "Dance Of The Infidels". Love songs, however, are to the fore in this selection, with tender versions of "My Old Flame", "My Ship", "It Might As Well Be Spring", "Everything Happens To Me", and "Every Time We Say Goodbye" as well as versions of "Where Can I Go Without You" and "Goodbye" which are every bit as touching as the Jasmine renditions. "When we play together it's like two people singing", said Jarrett of his reunion with Haden. The intentions of the song are honoured, the shades of meaning in a melody or a lyric explored instrumentally. As Charlie Haden put it, "Keith really listens, and I listen. That's the secret. It's about listening."

It is with sadness we report Charlie Haden died on 11 July, aged 76.