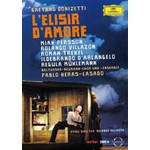 This marks Rolando Villazón's directorial debut in a dual-role: stage director and star singer (main role Nemorino) at the same time, and it is a clear WINNER.

Inspired by the cartoon character Lucky Luke and the Spaghetti Western-tradition, the tenor's staging for the Baden-Baden Festspielhaus is not only a film studio in the thirties but also a Western at the same time.

Extraordinary visual production, and one of the most memorable European operatic events of 2012.

"Villazon turns in an action-packed, razzle-dazzle production. The opera is set in a film studio during the silent movie era, where the cast is filming a Western...Villazon's Nemorino...comes across as individual, hyperactive, zany, but also a bit petulant and unlovable...Persson exudes easy-going charm...[d'Arcangelo] sings with fine, Italianate comic energy." (Gramophone)