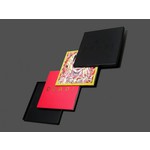 You're Dead!' is a shamanic pilgrimage into the psychedelic unknown of the infinite afterlife. A sonic, visual and metaphysical fusion of technological innovation and technical virtuosity that amounts to a transcendent, mind-expanding plasm that could only exist between our world and another.

"The album isn't about the end, it's really the beginning. It's a celebration of the next experience. It's the transition and the confusion. It's not 'hey you're dead.' It's 'hey you're dead!'" says Flying Lotus.