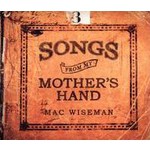 Mac Wiseman
Songs From My Mother

Songs from My Mother's Hand may well be the most personal album Mac Wiseman has ever recorded, and it came to be when he was nearly 90 years old -- he was 89 at the time he recorded this little gem. As a child growing up in Crimora, Virginia in the Shenandoah Valley in the 1930s, Wiseman suffered from a bout with polio and was prone to frequent spells of pneumonia as well, and he turned to music as his solace. Listening to the family's old Victrola radio, his mother would write down the lyrics to songs she heard and liked, most of which were variants of old British folk songs that had filtered into the American folk songbook, and Wiseman and his mother would then play these on the family pump organ. This unassuming, warm, and gentle set revisits his mother's notebooks, the formative songs of Wiseman's childhood. These songs were, and continue to be, at the heart of Wiseman's music, and while he is famous for his time in Flatt & Scruggs' band and as a vocalist for Bill Monroe's Bluegrass Boys, these songs are not bluegrass (which wouldn't appear on the American scene as a genre until the mid-'40s), and neither is this album. It's a folk outing, really, carried by Wiseman's worn but still solid singing, and as a testament to both his mother and to his own considerable musical legacy, it brings him, at 89, full circle.