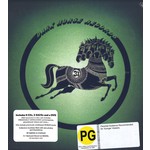 To coincide with the upcoming release of the repackaged/remastered 'The Apple Years' box set, a limited quantity of the 2004 'The Dark Horse Years' box set will also be released.

The box set contains seven CDs and a DVD as follows: