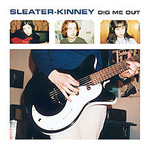 Sleater-Kinney
Dig Me Out

Sleater-Kinney was an acclaimed, American rock band that formed in Olympia, Washington in 1994. The band's core lineup consisted of Corin Tucker (vocals and guitar), Carrie Brownstein (guitar and vocals), and Janet Weiss (drums). Sleater-Kinney were known for their feminist, left-leaning politics, and were an integral part of the riot grrrl and indie rock scenes in the Pacific Northwest.

"Now [delivers] the punch their words describe…If [Sleater-Kinney] wanna be our Simone de Beauvoir, Dig Me Out proves they're up to it." [9/10] - Ann Powers, SPIN