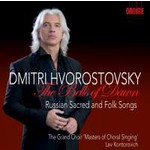 This is Ondine's third release with the Russian star baritone Dmitri Hvorostovsky, and is devoted to sacred works by Russian composers and Russian folk songs. Hvorostovsky is recognized as one of the leading baritones of today and is an international presence in famous opera houses throughout the world.

The title song of the album, Georgy Sviridov's Bells of Dawn, is an atmospheric work creating an otherworldly and remote landscape. The music for this disc has been especially chosen to entice the listener into the beauty of traditional Russian music as well as the skill and craft of contemporary composers in maintaining this tradition for the future.

Hvorostovsky is accompanied by the prestigious Russian Grand Choir 'Masters of Choral Singing', a choir which showcases the best traditions of Russian choral singing, under the direction of Lev Kontorovich.

"The singing here...is more sophisticated than you might expect to hear in your average Russian church on a Sunday morning but Hvorostovsky does not over-egg it. In the characteristically lush harmonies of Pavel Chesnokov's anthems, Hvorostovsky strikes a note of artless sincerity...[in the Varlamov song] he is equally in his element" Gramophone Magazine Editor's Choice, November 2014

'This richly beautiful music, little known in the West, suits Hvorostovsky's bass-baritone to a T, its dark creamy texture and plush legato still well preserved, and he delivers the solos with an appropriately un-operatic authority and intensity of feeling.' BBC Music Choral & Song Choice.