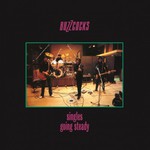 Singles Going Steady is THE definitive compilation album by English punk band Buzzcocks, first released in 1979. It was the first Buzzcocks album to be released in North America and intended as an introduction to the band for the American public, coinciding with a US tour. After healthy sales on import in the UK over the next two years, and following the group's split in early 1981, the album was belatedly released in the UK as a Greatest Hits album.

NME called it 'is the best Buzzcocks long-player to be realized' and signified the band as follows: 'Employing the most traditional of beat group formations and turning their attention to the most elemental considerations, Shelley and the Buzzcocks created pop of such intense truthfulness it literally hurts." Pitchfork listed Singles Going Steady as 16th best album of the 1970s.