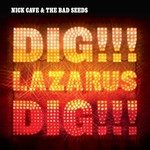 'Dig, Lazarus, Dig!!!' is Nick Cave & The Bad Seeds' fourteenth studio album, originally released in 2008. Recorded in June and July 2007 at The State of the Ark Studios in Richmond, Surrey, and mixed by Nick Launay at British Grove recording studios, in Chiswick, West London.

The last album to feature founding member Mick Harvey, who left the Bad Seeds in 2009. In several interviews Cave has stated that this album would "sound like Grinderman", his side project, who had released their debut album a year earlier. In line with this rough-and-ready approach, the album was recorded in about five days, an uncommonly short period for a full-length album.

Critical response to the album was overwhelmingly positive, with reviewers citing this as both a return to greatness and a new side of the band. A review from NME described the record as a "gothic psycho-sexual apocalypse" and gave it 8/10, while Mojo magazine proclaimed it their album of 2008.

Finally available on vinyl again after many years, this edition, approved personally by Nick Cave, is finally available again on its original format. Vinyl is heavyweight 180 gram. The vinyl transfer approval was overseen by Mick Harvey in the summer of 2014, and cut at Abbey Road studios.