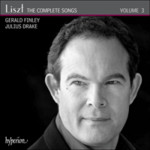 A third volume in Hyperion's Complete Liszt Songs cycle warmly welcomes to the series maestro Gerald Finley. The songs themselves encompass everything from finely honed miniatures to big-boned epics of tragic import, and these compelling performances elicit from the multi-award-winning pairing of Finley and Julius Drake a sense of paced drama and pathos which is rarely matched.

"This third volume deserves a special recommendation - first thanks to Gerald Finley, an inspiring champion of Liszt's music, and secondly because this volume includes the exalted Three Petrarch Sonnets (in Liszt's second version), where baritones usually fear to tread. Finley, accompanied by Julius Drake, is eloquent and impassioned in them." (Financial Times)

"The standard of the songs is impressively high...Julius Drake shines in all of them. So, too, does Finley, with his sensitivity to the fore in the fine Heine settings, bringing emotional engagement and a measure of Italianate warmth to the comparatively well known Petrarch settings...In excellent sound, the whole adds up to a delightful sequence of discoveries." BBC Music Magazine, April 2015 *****

"With the versatile Julius Drake at the piano any singer can be assured that he/she has the best possible support and the rapport between Finley and Drake feels like twin-souls working together. Excellent recording, excellent liner notes by Susan Young. Couldn't be better." (Recording of the month MusicWeb Aug 2015)