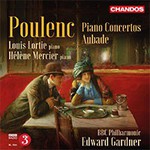 After a successful cycle of Chopin works for solo piano, exclusive Chandos artist Louis Lortie plays here works by Poulenc with his duet partner Hélène Mercier. In Aubade and the two concertos they are joined by Edward Gardner and the BBC Philharmonic.

The French-Canadian pianists draw a persuasive portrait of the melancholic Parisian that Poulenc was: playful and depressed, like his tutor, Erik Satie. There is always a sense of palpable anxiety in these pieces, be it the sarcastic joie de vivre of the 'choreographic concerto' Aubade or the ironic melancholy of the explosive Concerto for Two Pianos - Mozartean and Stravinskyan at the same time. Further examples are the contrasting pair of works for two pianos, in which the evocation of the sound of accordion and smell of fried potatoes in L'Embarquement pour Cythère complement the Élégie which, as Poulenc indicated, should be played with 'a cigar in your mouth and a glass of cognac on the piano'.

Similarly, the dazzling and dissonant Sonata for Piano Duet alternates between passages of charme and others that are féroce and strident. 'Inventing his own folk tunes', as Ravel noted, Poulenc took a decisive step in his musical emancipation with this very 'dissident' work.

Louis Lortie also plays the Piano Concerto, in which the traditional concerto virtues are more obvious: memorable tunes, sparkling orchestration, and a wide range of textures in the piano part.

"Performances of the soloists and orchestra are beyond reproach, and the sound quality is beautifully balanced between piano(s) and orchestra. Booklet notes are the usual standard for the label. There is no question that this is one of my discoveries for 2015, and begs the question of why I waited so long to make the acquaintance of Poulenc's concertos." (Recording of the Month MusicWeb Dec 2015)

"the distinct attraction of this performance by Lortie with the BBC Philharmonic under Edward Gardner is the way in which orchestral colour, as well as piano texture, is so clearly defined and zestfully articulated…Lortie is joined by Helene Mercier for cracking performances of the Two-Piano Concerto and the Sonata for four hands, their distinctive acerbities given whiplash emphasis by both pianists…and yet with their more lyrical leanings tenderly voiced." (Gramophone)