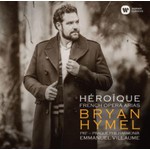 This recital, Héroïque, is tenor Bryan Hymel's first studio recording for Warner Classics. Its imaginatively conceived programme showcases him in repertoire that he has made his own on stages such as the Metropolitan Opera, Covent Garden and the Bavarian State Opera: opera in French that demands a thrilling heroism in both voice and style - and a top register of outstanding brilliance, since the album offers a grand total of 19 top C's.

In the space of just a few years, the American tenor Bryan Hymel has become closely identified with the kind of repertoire that is showcased in this recital, his first recording for Warner Classics: opera in French that demands a thrilling heroism in both voice and style. The imaginatively conceived programme showcases his prowess in arias to French texts by Verdi and Rossini, by Berlioz, Meyerbeer, Gounod and Massenet, and by three composers whose works are rarely heard today: Reyer, Bruneau and Rabaud.

On stage, Hymel has gone from Don José in Carmen to Enée in Berlioz's Les Troyens, the title role in Meyerbeer's Robert le Diable, Henri in Verdi's Les Vêpres siciliennes and Arnold in Rossini's Guillaume Tell.

Hymel's active repertoire is by no means limited to roles in French - at the Met, he has recently sung Rodolfo in La bohème, while his Prince in Dvořák's Rusalka led the Financial Times to describe his "lustre and visceral abandon" as "worth travelling continents to hear." His interpretations of the Prince, Enée and Robert le Diable at London's Royal Opera House led to his 2013 Olivier Award for Outstanding Achievement in Opera - the Oliviers are the UK's most prestigious awards in the worlds of theatre, opera, and dance; it complemented another high-profile prize he won in 2013, the Beverly Sills Artist Award, which recognises achievement at the Metropolitan Opera.

As an alumnus of Philadelphia's Academy of the Vocal Arts, well-known for nurturing exceptional operatic talent, Bryan Hymel was already a rising name when he sang Enée at London's Royal Opera House in 2012. He had performed the role in Amsterdam in 2010, but in London he was replacing no less a star than Jonas Kaufmann, who had cancelled his entire run of performances. Hymel's success in Les Troyens at Covent Garden led to another triumph six months later - this time at the Met. It was his debut at the USA's most iconic opera house and - in an act of true operatic heroism - he was stepping in at the last minute for another major tenor, Marcello Giordani. As the New York Times reported:

"When, Bryan Hymel appeared for his curtain call, the entire cast lined up onstage and applauded along with the audience during the prolonged ovation. This gesture from the singers seemed not just a welcoming tribute to a young colleague making his Met debut on short notice in the daunting role of Aeneas. The cast members ... seemed genuinely grateful to Mr. Hymel for saving the day by giving an impassioned and confident performance of a heroic role that dominates this formidable French opera."

"Aeneas [Enée], the Trojan hero, is one of the most difficult of all tenor challenges because it combines such different styles of singing: heroic passages where Aeneas must slice through Berlioz's orchestra with the power and ping of a Wagnerian tenor, yet also stretches of refined, French-styled lyricism ...."

"Mr. Hymel's voice, over all, is dark hued and muscular, with a quick vibrato and earthy texture and quite even throughout its range. In the demanding scene in the last act, when Aeneas ... resolves that he must abandon his beloved Dido and fulfill his destiny to found the city of Rome, Mr. Hymel sang with unflagging stamina and impetuous abandon, capped with some exciting full-voiced top notes."

Enée is usually sung by an 'heroic tenor' as we understand the term today (say, Jon Vickers or Plácido Domingo), but Arnold in Guillaume Tell is heroic in a different sense, and it is extremely unusual for a tenor to sing both these roles - let alone shine in both. As Bryan Hymel points out, Arnold's aria 'Asile héréditaire' and its cabaletta require the tenor to produce no fewer than nine top C's. His success in meeting Rossini's challenges becomes clear in the reviews of Guillaume Tell at the Bayerische Staastoper in 2014: "Bryan Hymel tackles the murderously high part of Arnold with bravura and brilliance; it is thrilling to hear him," (Financial Times); "Bryan Hymel was outstanding in the nearly impossible role of Arnold Melchtal… [he] exhibited an envious sense of lyrical phrasing and no audible strain in the extended upper register." (Opera News)

The spirits of two French tenors of Rossini's time - Adolphe Nourrit and Gilbert Duprez - hang over the role of Arnold, but the recorded legacy of two glorious French tenors of the early 20th century, César Vezzani and Georges Thill, helped to determine the choice of repertoire for Héroïque - not least the arias from Sigurd by Ernest Reyer (1823-1909), L'Attaque du Moulin by Alfred Bruneau (1857-1934) and Rolande et le mauvais garcon by Henri Rabaud (1873-1949); along with 'Inspirez moi, race divine' from Gounod's La Reine de Saba (a number recorded by Caruso), they will prove irresistible to lovers of operatic exotica.

Bryan Hymel comes from New Orleans, a city with a strong Gallic influence in its history, and his family is French on his father's side (the family name is pronounced 'Eemel'), though he was not brought up to speak French. His mother's family is of Italian extraction and his initial interest in singing was sparked by records of Mario Lanza and by the concerts of the Three Tenors in the 1990s - interestingly, he was especially impressed at the time by Luciano Pavarotti's rendition of 'Pourquoi me réveiller' from Massenet's Werther.

He studied initially at Loyola University in New Orleans before being selected for the Academy of Vocal Arts in Philadelphia, where he started taking lessons with the renowned voice teacher Bill Schuman. When he sings French repertoire, he uses his voice in a very specific way to accommodate the language - paying particular attention to the vowels and the nasal sounds - and the musical style.

"French music of this kind makes considerable technical demands," he explains. "It's a question of applying belcanto technique while shading the words in a way that works for the vocal line. And although this album emphasises heroic music and heroic characters - and the vocal lines require a total of 19 high C's, two high C sharps and one D - there is also a great deal of lyricism. All the characters and their arias are heroic in some way - but they are certainly not all the same."

"This is a major release by a major tenor with the type of voice we rarely get to hear. Beginning with Arnold's last-act scene from Guillaume Tell, with its pile of high Cs, the CD gets off to a thrilling start, with every note in place and the excitement at a very high level. Hymel can sing a fine nuanced line as well; much of Vasco de Gama's "O Paradis" is sung gently, making its rarely performed, agitated cabaletta even more exciting, including an interpolated high D-flat at its close. Arrigo's aria from Les Vepres Siciliennes is handled with a smooth, entirely Verdian legato, with the text intelligible and thought through, while the aria's final allegro has passion, and again, a spectacular D-flat. Hymel has sung Aeneas in Berlioz's opera on stage to great acclaim, and while he may lack Jon Vickers' wild-eyed expressivity and his ability to croon the middle section as if in a dream, it's a stunning performance nonetheless...this is a remarkable voice, and this CD is a mighty debut recital, with the content as varied as the singing. Bravo!" (ClassicsToday March 2015)

"The voice is strong, tightly-focused, darkly coloured and unusually even across all registers. He easily manages those "Howzat!" moments up on high that bring many tenor arias to a close. Yet he's equally expressive shading his voice in his middle pitch, almost cradling the listener with intimacy." (Times)

"Hymel's expressive range is renowned; a quality that comes over remarkably on this CD. The Warner sound team has excelled in providing clarity, presence and a satisfying balance of voice and orchestra. Throughout the collection Bryan Hymel is in spellbinding form. Those who enjoy French Grand Opera and the heroic tenor voice will be in their element with this outstanding release." (Recording of the Month MusicWeb March 2015)

"American tenor Bryan Hymel shows himself in this debut recording on Warner to be completely at home in every facet of the works presented. It's not just the nineteen-yes, nineteen-high Cs that are stricken with all the confidence of Big Ben at high noon; it's the gorgeous way he navigates the fully-laden melodic lines that are so part and parcel of this type of music. By its very nature such singing is exciting-that's why we love tenors so much-but Hymel takes care to make sure that the message of the text is being put across in as faithful and genuine, and authentic a manner as is possible. He is certainly not stuck in this repertory, as his experience to this point in time shows a wide and diverse career in the making. But the French repertory has never been an easy nut to crack, and Hymel seems poised to set the standard for a new generation. Warner's sound is vivid and warm." (AudAud.com April 2015)