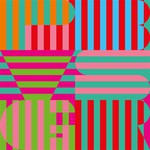 When Panda Bear met the Grim Reaper, they jammed.

Noah has had a far-from-quiet few years since the release of his fourth solo record, 2011's Tomboy. Since the breakout success of 2007's universally-adored Person Pitch, each new Panda Bear release is a highly anticipated event, and a high-profile Daft Punk collaboration later (Doin' It Right, from Random Access Memories), that's more the case than ever.

Panda Bear Meets The Grim Reaper finds our hero leaving the airy minimalism of Tomboy and unpacking his sonic toolbox again, rearranging the multitude of his disparate influences into the ever-morphing concoction he refers to as "the soup."

Old school hip-hop textures and production techniques meld with the intuitive, cyclical melodies he has become known for, for a sound that is at once dense and playful.

Panda Bear Meets The Grim Reaper signifies a pivotal point for an artist who has proven he can continue to evolve while remaining at the top of his game. As Noah says, "It's sort of marking change - not necessarily an absolute death, but the ending of something, and hopefully the beginning of something else."