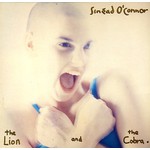 Sinead O'connor
The Lion And The Cobra (LP)

The Lion And The Cobra (1987) is the highly successful debut album by Irish singer Sinéad O'Connor. Deemed 'one of the most electrifying debuts in rock history', the album charted well and sold 2,500,000 copies worldwide. The album featured prominent session musicians John Reynolds on drums, former Adam and the Ants and Siouxsie and the Banshees guitarist Marco Pirroni, former Japan guitarist Rob Dean and Mike Clowes from Friction Groove on keyboards.

Sinéad O'Connor's debut, The Lion and the Cobra, was a sensation upon its 1987 release, and it remains a distinctive record, finding a major talent striving to achieve her own voice. Like many debuts, it's entirely possible to hear her influences, from Peter Gabriel to Prince and contemporary rap, but what's striking about the record is how she synthesizes these into her own sound -- an eerie, expansive sound heavy on atmosphere and tortured passion. If the album occasionally sinks into its own atmospheric murk a little too often, she pulls everything back into focus with songs as bracing as the hard-rocking "Mandinka" or the sexy hip-hop of "I Want Your (Hands on Me)." Still, those ethereal soundscapes are every bit as enticing as the direct material, since "Troy," "Jackie," and "Jerusalem" are compelling because of their hushed, quiet intensity. It's not a perfect album, since it can succumb to uneven pacing, but it's a thoroughly impressive debut. -AllMusic