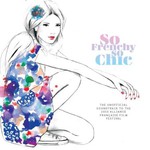 Various Artists
So Frenchy So Chic 2015

So Frenchy So Chic, the annual compilation of the year's best new music from France, is back for its triumphant eleventh edition.

How has So Frenchy stayed so fresh? Simple. As the style of French music changes - with an accent on indie one year, reinvented yé-yé the next - So Frenchy changes to reflect the current sound. Right now French music is enjoying newfound popularity around the world, with new tunes, fresh faces and an exciting sense of momentum.

That excitement is captured on the 2015 edition of So Frenchy, with a few familiar voices in the mix for regular listeners. The French-Finnish indie-pop band The Dø and France's ever popular chanteuse Emilie Simon as well as longtime favourites Féfé and Camille are also featured in a couple of typically effervescent, toe-tapping tracks.

A few new names to take note of include Cléa Vincent, whose irresistibly danceable track 'Retiens mon désir' kicks off the compilation with a nod to classic sounds of the 80s. Elsewhere, the romantic dandies Feu! Chatterton offer two tracks - one in a confessional, slow-burn Serge Gainsbourg vein titled 'A l'aube' and the other an up-tempo piece of epic pop titled 'La Malinche'.

Singing in English, Mina Tindle effortlessly blends her folk and new-wave style in 'The Curse', while Scarecrow reworks some traditional blues sounds into his own brilliant hip-hop. There is no one genre called 'French' (despite what iTunes says) which means that across the two-disc collection of songs you'll meet a wide range of musical styles. The one thing every selection shares is quality.

The Magic of Jascha Heifetz Remastered

So Frenchy So Chic 2017
more suggestions…