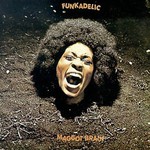 It starts with a crackle of feedback shooting from speaker to speaker and a voice intoning, "Mother Earth is pregnant for the third time, for y'all have knocked her up" and talking about rising "above it all or drown in my own sh*t." This could only have been utterly bizarre back in 1971 and it's no less so decades later; though the Mothership was well on its way already, Maggot Brain really helped it take off.

The instrumental title track is the key reason to listen, specifically for Eddie Hazel's lengthy, mind-melting solo. George Clinton famously told Hazel to play "like your momma had just died," and the resulting evocation of melancholy and sorrow doesn't merely rival Jimi Hendrix's work, but arguably bests a lot of it. Accompanied by another softer guitar figure providing gentle rhythm for the piece, the end result is simply fantastic, an emotional apocalypse of sound. Maggot Brain is bookended by another long number, "Wars of Armageddon," a full-on jam from the band looping in freedom chants and airport-departure announcements to the freak-out.

In between are a number of short pieces, finding the collective merrily cooking up some funky stew of the slow and smoky variety. There are folky blues and gospel testifying on "Can You Get to That" (one listen and a lot of Primal Scream's mid-'90s career is instantly explained) and wry but warm reflections on interracial love on "You and Your Folks, Me and My Folks," its drum hits distorted to give a weird electronic edge to the results. "Super Stupid" is a particular killer, pounding drums and snarling guitar laying down the boogie hard and hot, while "Hit It and Quit It" has a great chorus and Bernie Worrell getting in a fun keyboard solo to boot.
5 / 5 All Music Guide.

One of the greatest albums of all time. Gin.

A1 Maggot Brain
A2 Can You Get To That
A3 Hit It And Quit It
A4 You And Your Folks, Me And My Folks