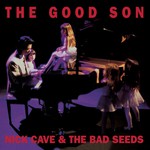 Originally released on the 17th April 1990, recorded in Sao Paulo, Brazil, with an eight-piece string section comprised of local musicians alongside Nick Cave & The Bad Seeds. Ranges from poignant elegant ballads like "The Ship Song" to dark timeless numbers like "The Weeping Song".

This album has been re-mastered (overseen by Mick Harvey, former Bad Seed and founder member), and the artwork reflects the original release from the cover to the printed inner sleeves.