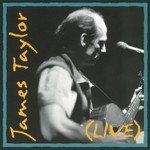 Live is not just the 15th album by James Taylor, it's also the singer-songwriter's very first live record. Recorded during a tour in November of 1992, the multi-platinum album was originally released in 1993 and peaked at number 20 on Billboard magazine's Billboard 200.

A live James Taylor album had been suggested, demanded and contemplated for many years. But never had all the necessary elements fallen into place together. Until the tour that had been planned specifically to record this live album.

The best performances from 14 shows were chosen, mixed and assembled into this record. The double album includes such James Taylor tunes as "You've Got A Friend", "Something In The Way She Moves", "Country Road" and "Fire And Rain".

With fully remastered audio, this double album is available on vinyl for the very first time! - Music on Vinyl