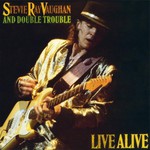 Live Alive, originally released in 1986, is an essential Blues double album compiled from four live performances by Stevie Ray Vaughan and Double Trouble. The performances were recorded in 1985 at the Montreux Jazz Festival (July 16), the Austin Opera House (July 17 + 18) and at Dallas Starfest (July 19). The amazing live record is filled with gems from SRV's first three albums, plus a great rendition of "Willie The Wimp" featuring his brother Jimmy (who also makes a guest appearance on "Love Struck Baby", "Look At Little Sister" and "Change It").