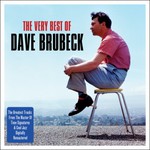 Dave Brubeck
The Very Best of

Keyboardist, bandleader and composer Dave Brubeck is the man the New York Times credited with 'helping make jazz popular again in the Fifties and Sixties.' His recording of 'Take Five' remains one of the few jazz records instantly recognised by members of the general public. But, as fans know, there was more to Dave Brubeck's music than one composition or album. Explore the Jazz genius' career with this 27 track retrospective.