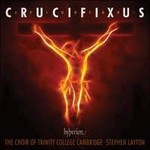 The choral music of Kenneth Leighton is beloved of cathedral and collegiate choirs across the land: immersion in the Anglican tradition dates back to the composer's earliest years as a boy chorister and combines with a unique adult musical language to create a world at once radical and traditional. And who better to perform it than the musicians of the next generation-Trinity College Choir Cambridge under their director Stephen Layton.

"All the performers, whether singers or organists are on really fine form, with Stephen Layton certainly bringing out the best from his forces. Ted Tregear's booklet notes, which were compiled with the assistance of the composer's daughter Angela, give a good insight into the life of the composer and his music. The recorded sound is also first rate. The engineers have captured the performances in a sympathetic and pleasing acoustic, which is no mean feat when you realise that most of the music was recorded in the cavernous space of Lincoln Cathedral. (MusicWeb April 2015)

"The writing [in Crucifixus] is at its finest when tenor Andrew Kennedy is singing: his contribution is altogether gripping, and unstintingly committed. There's wonderful quiet singing from the choir in the concluding 'Drop, drop slow tears'...The account of the Missa brevis is if anything even better...[Layton] elicits great subtleties of expression from his young singers." (BBC Music Five Stars)