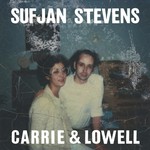 Carrie & Lowell is an album by American indie folk musician Sufjan Stevens scheduled for release through Asthmatic Kitty on March 31, 2015. Unlike Stevens' last studio album, the electronic Age of Adz, Carrie & Lowell is sparsely instrumental and returns to the performer's indie folk roots.

The simple folk tunes on the album were recorded in 2014 at Stevens' home studio in Brooklyn. The songs were inspired by the 2012 death of his mother Carrie (the album title also references his stepfather) and the family trips they took to Oregon in Stevens' childhood.

Let Me Get By

I Love You Honeybear
more suggestions…