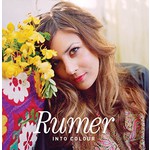 It would be easy to forgive mistaking Rumer's Into Colour for a lost '70s soft pop gem. So of the era is both her voice and arrangements that the only thing betraying the album's 21st century origins is her 1979 date of birth.

To achieve such an era-appropriate sound and feel, singer-songwriter Rumer enlisted the help of Rob Shirakbari, music director for Burt Bacharach and Dionne Warwick, and Darryl Hall's rhythm section. Together with Rumer's Karen Carpenter-indebted approach to ballad singing, they manage to transcend mere imitation or pastiche to create an album full of melancholy lyrics and heartbreaking melodies befitting the best of those who came before her.

Rumer has crafted an album full of impeccable pop balladry that, if there is any justice in the world, will bring her a broader audience the likes of which the Carpenters and their ilk saw at the height of their popularity. But perhaps she arrived some forty years too late for that.

A1 Intro (Return of Blackbird)
A2 Dangerous
A3 Baby, Come Back To Bed
A4 You Just Don't Know People
A5 Reach Out
A6 Sam
B1 Play Your Guitar
B2 Pizza and Pinball
B3 Better Place
B4 Butterfly
B5 I Am Blessed