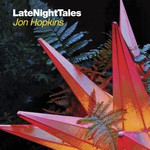 Late Night Tales welcome UK producer and musician Jon Hopkins to the fold with a beautiful sequence of songs and music.

The story arc with which Hopkins succeeded on 'Immunity' makes its appearance on Late Night Tales too with a perfectly sculpted excursion on this widescreen mix. . Opening with the unreleased 'Sleepers Beat Theme' by composer Ben Lukas Boysen, ghostly pianos skip elegantly hither and thither, among rising strings, as on Darkstar's 'Hold Me Down'. Nils Frahm is here, his sonic palette perfect for the job, while labelmate A Winged Victory For The Sullen contribute 'Requiem For The Static King Part I'. Sigur Ros offshoot Jónsi & Alex's heroic 'Daniell In The Sea' sends us forth towards the Baltic with tears streaming.

Beats occasionally appear, as on the Grace Jones-sampling 'Yr Love' by Holy Other or the pair of Black Country acts Bibio and Letherette, whose 'After Dawn' is almost spry in comparison to the minor key symphonies on display here. The perfect contrast to this comes from Alela Diane's wistful 'Lady Divine' or even Four Tet's mesmerising 'Gillie Amma I Love You', with its enchanting kids' choir. Exclusive to this release, Jon Hopkins provides a startlingly vulnerable new piano version of Yeasayer's 'I Remember'.

Poet and fellow Brian Eno collaborator (their joint album 'Drums Between The Bells' was released by Warp in 2011) Rick Holland narrates the exclusive spoken word closer 'I Remember', underpinned with additional sound design by Hopkins.