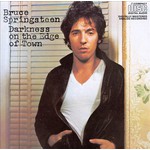 Bruce Springsteen
Darkness on the Edge of Town (LP)

180 gram audiophile reissue of Bruce Springsteen's 1978 album, Darkness on the Edge of Town.

Coming three years and one extended court battle after Born to Run, Darkness on the Edge of Town was highly anticipated. Some attributed the album's embattled tone to Bruce Springsteen's legal troubles, but it carried on from Born to Run, in which Springsteen had first begun to view his colorful cast of characters as "losers." On Darkness, he began to see them as the working class: his characters, some of whom he inhabited and sang for in the first person, had little and were in danger of losing even that. Their only hope for redemption lay in working harder, and their only escape lay in driving. Springsteen presented these hard truths in hard rock settings, the tracks paced by powerful drumming and searing guitar solos. Though not as heavily produced as Born to Run, Darkness was given a full-bodied sound; Springsteen's stories were becoming less heroic, but his musical style remained grand; the sound, and the conviction in his singing, added weight to songs like "Racing in the Street" and the title track, transforming the pathetic into the tragic. But despite the rock & roll fervor, Darkness was no easy listen, and it served notice that Springsteen was already willing to risk his popularity for his principles. - AllMusic