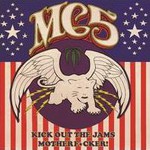 MC5
Kick Out the Jams

In the '60s, plenty of rock bands talked about revolution, but that was a creed the MC5 lived by, and one they backed up with both music and action. Aligned with the left-wing White Panther Party and managed by poet and activist John Sinclair, the MC5 were the only rock band to play at the protests organized by the Yippies at the 1968 Republican Convention where Richard Nixon was nominated to run for president, and their credo of "dope, guns, and f---ing in the streets" earned them public condemnations from vice president Spiro Agnew. But beyond their politics, the MC5 were also one of the best rock bands of their day, playing tight, forceful, and passionate music that anticipated the articulate rage of punk and the sonic impact of heavy metal. Kick Out the Jams Motherf*cker! is a collection that brings together 17 classic tracks from the band's archives, including several of their best-known songs along with prized rarities to offer a portrait of this band's blazing days of glory; the set also includes original members Michael Davis, Wayne Kramer, and Dennis Thompson performing the MC5 favorite "Sister Ann" in 2003 with Lemmy from Motörhead on vocals. (AllMusic)