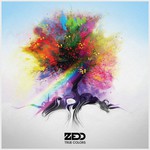 True Colors is the second studio album by Zedd.

Each song on the album is associated with a colour, Zedd commented during the promotional campaign in Los Angeles. "To me, certain things sound a certain colour. A lot of reverb will always sound cold, which will always make me think blue. On this song ["Straight Into the Fire"], the drop is very energetic and very aggressive, kind of like fire, too, so this one was super easy to pick orange."

Born Anton Zaslavski, German producer Zedd broke onto the European electronic scene in 2010 with a remix of Skrillex's "Scary Monsters and Nice Sprites." Though known for his glitch, pulsing production, Zedd's musical journey began in the acoustic realm. Born into a musical family, the future producer cut his teeth on the piano at four years old and eventually moved to drums and played in a rock band before being drawn into the digital world in 2009. Zedd built a name for himself with his remixes of artists like Lady Gaga, B.o.B, and Armand Van Helden while also releasing his own singles and EPs.