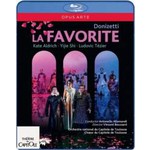 One of the composer's most beguiling scores, La Favorite is Donizetti's La favorita in its original French form - a tale of love and war that represents a glorious mix of Italian bel canto and 19th century grand opera.