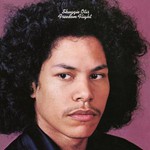 1971's Freedom Flight is perhaps, in its own way, every bit as adventurous and regal as Shuggie Otis' masterpiece, Inspiration Information. Produced by Shuggie's father, R&B legend Johnny Otis, the album features seven stellar, genre bending cuts, most of which were written or co-written by Shuggie. Oh yes, he was 15 was the time. Shuggie not only arranged the date, he played everything from guitars and bass organ to various percussion instruments. Additional musicians include Wilton Felder, Stix Hooper, Aynsley Dunbar, Preston Love, George Duke, and a trio of backing vocalists -- Clydie King, Venetta Field, and Shirley Matthews -- all of whom would grace Bob Dylan's Street Legal a few years later. In addition, Johnny employed a full string section for these sessions. Upon listening to Freedom Flight, the influence of Jimi Hendrix is everywhere. Not so much in Shuggie's playing, but in its texture and production. He and Johnny had obviously spent a lot of time listening to Axis: Bold As Love and Electric Ladyland. In addition, the recordings of Taj Mahal, Fred McDowell, and Frank Zappa figure in here, too. Freedom Flight boasts Shuggie's single greatest composition: "Strawberry Letter 23," a monster platinum single for the Brothers Johnson. But it's Shuggie's version that stands the test of time best. It's slower, much more baroque and paisley than the cover. The tenderness in Shuggie's voice as he intones the lyrics is a real draw. "Me And My Woman," is one of the funkiest blues tunes ever recorded, with its dirty keyboard bassline that George Clinton stole wholesale three years later. In addition, two long instrumental works that end the album, "Purple" (just try to convince someone that Prince didn't listen to this tune in particular, and this album in general, over and over again before forming his aesthetic), and the title tracks are visionary and expansive with jaw-droppingly virtuoso guitar playing that is so tastefully, soulfully, and elegantly executed it' still hard to believe after all these decades that a 15 year old ever played them: Stevie Ray Vaughan had nothing on Shuggie. Freedom Flight is just as important as Inspiration Information. It's a bit rawer, not quite as lush, but it is every bit as visionary and groundbreaking. - AllMusic