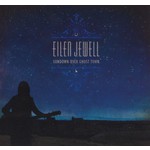 Honesty, confidence, and respect permeate Eilen Jewell's music, dating back to her self-released Boundary County album in 2006. Since then, the Boise native has recorded five studio albums for Signature Sounds with her road-tested touring band, and two more as a member of the Boston-based gospel-charged Sacred Shakers, which includes that well-oiled band at its core. Her latest, Sundown Over Ghost Town, is a masterful culmination of Jewell's work to date.

As hard as it is to categorize Jewell's music-terms like alt-country, roots-rock, country-noir, and Americana get used a lot-it's even harder not to become thoroughly enraptured by the singer/songwriter's powerful versatility, musical stories, and images. And that gorgeous voice makes you feel like she's singing just for you, out on the breezy back porch or by a crackling campfire. She does so much, so well.