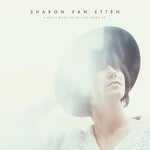 Sharon van Etten
I Don't Want to Let You Down (EP)

Sharon Van Etten has never needed much room to make a grand statement. With four albums diligently released during the last six years, she's become one of music's most astute new cartographers of the heart, able to capture emotional trials and triumphs with incisive lines and a voice that loses nothing in the translation and transmission of feelings.

"I Don't Want to Let You Down" boasts an impressive roster of collaborators. Adam Granduciel and Dave Hartley from The War on Drugs appear on the release, as well as Megafaun's Brad Cook and Ben Folds Five's Darren Jessee.