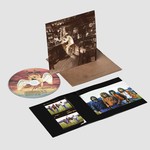 Led Zeppelin
In Through The Out Door

This is thE remastered edition of Led Zeppelin's 1979 album In Through The Out Door, wrapped in a brown paper bag replicating its initial release.

On its release in the summer of 1979, In Through The Out Door topped the U.S. and UK album charts and has since been certified six-times platinum. Sadly, it would be the last album that Led Zeppelin recorded prior to drummer John Bonham's passing the following year. Among the seven album tracks are "Fool In The Rain," and "All My Love," two songs that remain rock radio staples to this day.